And the world keeps spinning..... 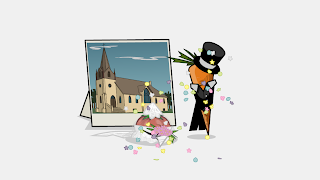 A lot has happened in a week. I didn't get the Vocam job, they called up and said it was very close and I came second. They decided to go with someone who has more experience with big corporate work and who knows how a database system more or less works. But they did say that they'll throw any freelance stuff my way if there is any to be done, so we'll see!

I saw Iemedia last Wednesday and they gave me a freelance gig creating Avatars for a game. It's loads of fun but time consuming. Figuring out hairstyles and outfits does take time. Am going to be seeing them tomorrow and see what they think of the first batch of designs I sent them!

I also went to Bigkidz last Friday! I animated my one scene for a film we'll be giving to Animadness, a competition we joined. A still picture of it is above. Hoping that all goes well and that we win something again.

Thomas and I competed for the 15/15 Film Festival last Saturday. It was great and I think the animation that he and I made is very strong and we're hoping that it is received well in the screening. Our film is called "Chikky the Wonderbird". It was done in the same style as the OIL animation series that Thomas and I are doing.

I saw Thomas today and brought him all the footage for the new show reel that I will NOT be putting on my website because I cannot make it public. There will be a link that I will be sending to employers but can't put it for public viewing yet. However, I should be able to once Dogstar comes out sometime this year.

Well, that's all for now! I think I'll be spending most of my week making Avatar designs and hopefully a new Illustration to put on Redbubble and finish Oil Episode 04!
Email Post