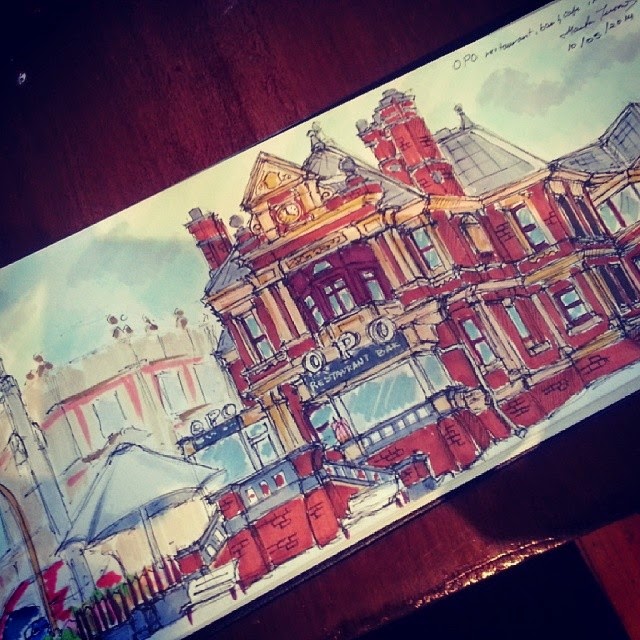 We were at Kew today and I was suppose to be sketching at the Alexander Gardens but I had gotten there early and started drawing this building.  I thought it was cool and a distinct landmark.  When I finished the sketch I went to the gardens to see where the group was.  At that time, the rain was pouring!  They were all crowded in a rotunda and there wasn't really much space to draw.  So I went back to my spot and finished whatever details I was lacking.

I went inside the QPO after I have finished the line work, for a light lunch and to colour my piece.  The other sketchers where planning to come to the QPO when they were done.  I just did not feel like standing out in the cold, colouring today or going back to the gardens in the rain.  Anyhow, sitting down and colouring and listening to the conversations of people around me was pretty interesting as I was sitting on a long cushioned bench.   I had a couple sit down next to me on one side and I knew pretty quickly that they where on a first date.  Most likely they met online as they did not mention any common friends or common third party experiences at all.  Then on the table next to me was an  mother and son duo and a lot of conversation veered to how cheap some of the relatives where.  It was pretty amusing.  In the meantime am colouring this piece and letting my poor hot chocolate get cold.  Pretty hard to get out of the zone when you're in the zone.

The other sketchers arrived, just as I started putting in the brick details.  I joined their table and as I moved, one of the waiters alerted the owner to my drawing and he took a picture of it.  I gave him my card, in case he wanted to buy it at some point.  Was good fun!  I'll be putting this piece in the USK exhibition at Hawthorn Town Hall Gallery in November.  Along with a few more, if they look good!

To review QPO, service was attentive, hot chocolate and soup where nice and they had lots of pretty cakes on display.  The mains sounded good but I have yet to try.  Next time if I pass by there.  Urban Sketching is great as am discovering quite a lot of Melbourne and really appreciating the architecture of the city.    If only I had better perspective skills...