Showing posts from August, 2017
Show all

Mecha Hummingbird 001 and the start... 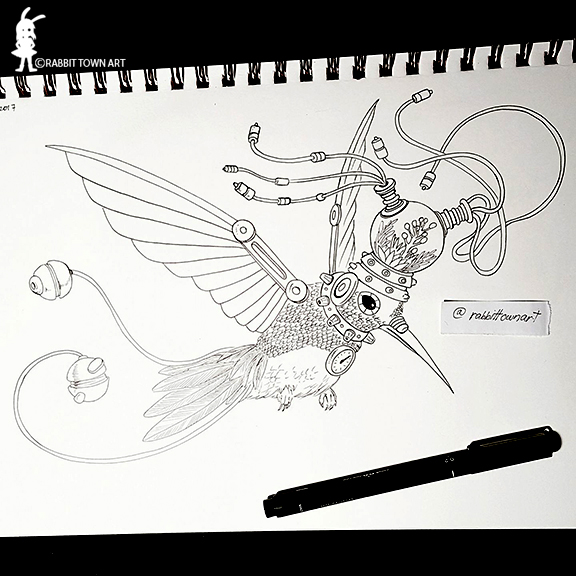 Hi!  How goes it?  Things have been busy as usual.  I finished a big illustration job on top of full-time work and I still have one more job to do after hours and I am super lucky that the deadlines for my freelance work have been non-specified for the most part.  I don't like delaying it for too long though, as much as possible. I have also started the Design 100 something challenge inspire by Jake Parker .  Check out the videos.  The challenge, itself, is an old one but I've been meaning to do it for a long time now and I thought that this would be a good thing to do while I am working full-time.  I am hoping I can make a book or at least make exhibition pieces out of this. I have drawn up 9 so far and I've uploaded the black and white line work on facebook and instagram but from hereon, I will be skipping some numbers and perhaps do a smaller res of 10 at a time. Got to keep some things unseen! Or should I?  I also want to color them all too and try different thin
Post a Comment
Read more 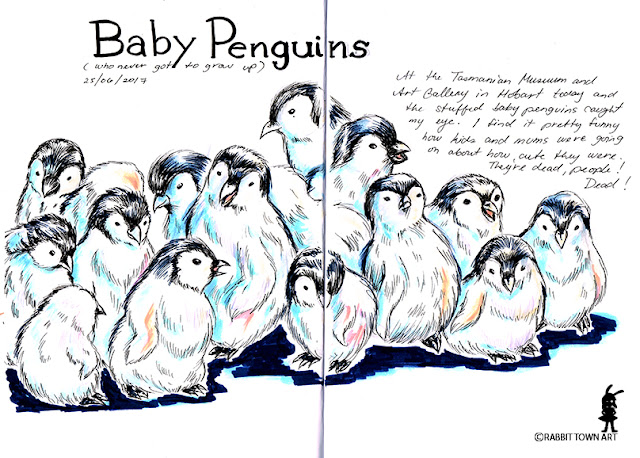 Hi!  Well, this is the last page of my journal entries from my Hobart trip.  It's been a while since that trip and this is  my favourite drawing out of the lot.  Cute dead baby penguins. I should post the urban sketches I did.  I never got around to coloring them though. For news...I got my hair done, finally.  It's only been 8 months or so.  I feel a lot less scraggly now. I finished 2 freelance jobs and am still working on two other.  My contract for a TV series job I will be working on for a year starts tomorrow.  I am filled with trepidation though as I will have more responsibilities than normal.  Nothing I haven't done before but I guess cos I have done it before that I know I don't particularly enjoy being in charge of other people.  I prefer to do just my own work and go home, we shall see how I go and discuss if it really isn't my cup of tea. I have also started drawing my steampunk fish and may even do birds soon.  I am still rather weak drawing mech
Post a Comment
Read more 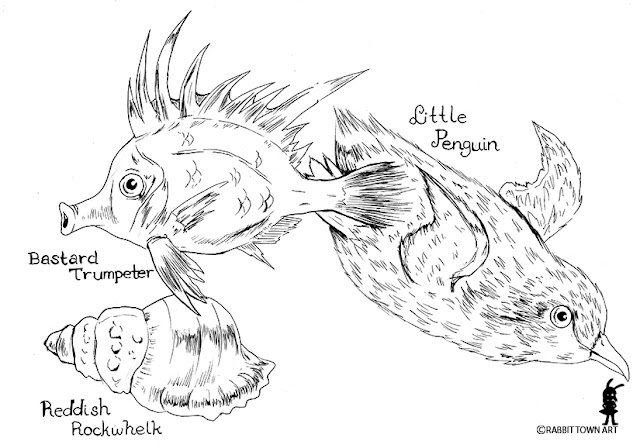 Hi!  It's been a while since I last wrote, can't say anything exciting has happened since I last posted.  Finished the last project at the studio but still waiting until it is released to say anything about it.  I am also starting another TV series job on Monday, though again, I'll be leaving the name out until I get permission from the studio to talk about it.  Not that I can say much until it's released, yet again.  I also finished another e-book job recently and still have another one to go.  I will need to start the designs either tomorrow or tonight.  In fact, this week has been a bit of catch up week on freelance for me since I've taken the week off from my current studio and will hopefully be recharged enough to last till my next break which will be in December, during the Christmas period.  At least it will be a longer one! Hehehe. sorry to be so vague about what I've been doing, that's the problem with working on projects that are not my
Post a Comment
Read more
More posts

2D Animator and Illustrator living in Victoria, Australia. Been working in the industry since 2004. Got her first freelance job in 2002. A workaholic that tends to have several projects on the go.