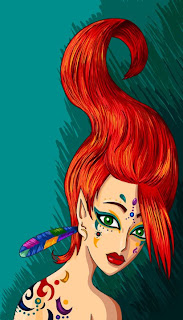 Well, it's been a long time since I last wrote anything. Tons of stuff has been happening these last few months. I have gotten back into climbing regularly, occassionaly boulder on Fridays and am still going at it at Muay Thai (my bad as I didn't go to any classes this week, needed some time to recover) and work has been going rather well.

The drawing on the left was the last illustration I did for fun. Drew that in some time in October....

My animation has definitely improved. Amazing that sketching before animation (and not just keying out poses in the computer) really helps with character animation since I am now really thinking of what the character is doing and thinking instead of just going on auto pilot and moving them and I think I've also gotten a lot faster because of it. Much thanks to Justin who was adamant about the benefits of sketching and careful planning. I'm still reading books on animating when I get the chance.

OIL ( a project Thomas and I are working on ) hasn't progressed in a while. I'll be working on that again shortly. I have also been craving going back to fashion illustration. I used to do that as a hobby. Loved it but I haven't done much of that in years and I think it's something worth going back to.

I helped Thomas move out about October to his current new place, I am rather jealous of it as it's huge! I've been going over there a lot recently to just hang out and workout with him using his gym set but that may change pretty soon. We'll see.

I still think of the money I loaned my parents, especially now with the economic crisis. One of my goals was to get a house before am 30 and that still hasn't happened and it really was because of their inability to pay me back. It has damaged the family ties a bit I must say but there's not much else I can do except to make sure I never lend them any money ever again and to save up when I can.

I dont know what I am doing for Christmas at this point....probably sleep. A lot of sleep....and maybe rearrange my unit and go all out at Muay Thai and climbing... not feeling the holiday spirit that much am afraid. Especially when am only going to a get a week and a half off work. Working till December 24... what a pain.

I am trying to get over some mental barriers more than physical barriers when it comes to sport activities. My brain going "you're tired and your body has had enough" tends to come in very quickly and it's still a bit of a shit fight to go "no, I can still keep going". It's great when I get pushed at Muay Thai and at climbing by other people but I can't rely on other people to push me all the time I need to have that in myself.

Celebrating Sandra's Birthday on Monday and I need to go out and buy her a present now and maybe seeing Astri today too!
Email Post