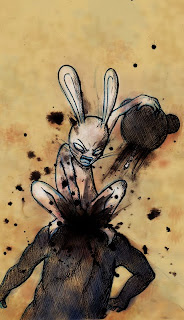 Well things have been very hectic since I last wrote. I had to move house while juggling several different jobs and that did drive me crazy for a little while. My website had to die because my service provider wasn't letting me update and I am still working on refining the script of my short film in-between freelance work. An old friend is back in my life and I have made many new friends and connections on the way from my previous job. Things went crazy at the studio that can't be named and a lot of colleagues suddenly found themselves without work. Luckily, most have found gigs or things to keep them going.

I am currently finishing up a job, working on a charity job and animating on Dogstar season 02. Am trying to make a new website, databasing Music Video Festivals for a friend who will cut my showreels in return. I am re-writing and designing stuff for my short film and trying to fit in exercise, relaxation and normality in-between all that.

It has been a long but mostly pleasant few months. The illustration posted was for Unit 16. I was rather pleased with. I am hoping (since this month is slow on work) to build up a new illustration folio.

I have also started taking up life drawing again, found a really nice place at the QV which I am making a point to go to every Wednesday.

So much to do and always so little time.
Email Post