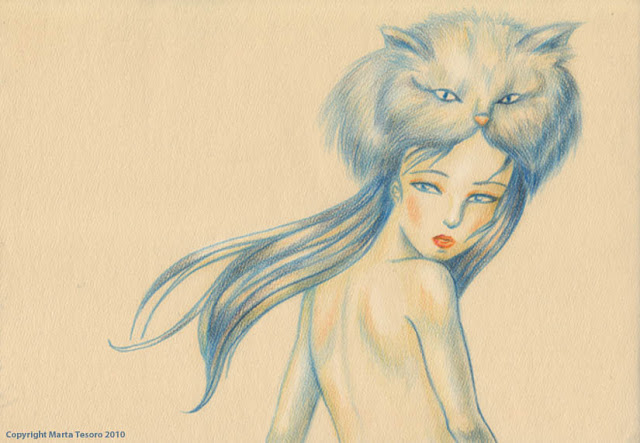 Is that a cat head on her head?  Yes it is.  Drawn with colour pencils and put into photo shop for some love. I felt like drawing the first thing that popped into my head today.  It's the first independent piece I've done in the last two weeks.  Things got incredibly busy since I last wrote.

Current news.... my contract at Dogstar ended about a week ago and I am now working as a Flash Animator at Studio Moshi for the next 5 weeks or so.  I just started last Tuesday and it has been a lot of fun thus far.  It's refreshing working on an animation that has adult themes in it.  I also finished a corporate gig today. It was going on at the same time with my last few days at Dogstar and during my first week at Moshi, and am very pleased about my finishing it.  It was a fun job but I need to sleep every now and then.  I celebrated my first few hours of semi-free time to draw this illustration....a lady with a cat on her head.

Plans at the moment....still trying to find time to finish my website, working on another illustration with fellow animator/illustrator Astri for our Lookout series, ( the link is to the latest one on Red Bubble, we're up to number 13 now), which will be number 14 in the series.  Animating a small segment for Brett Braddock, creating more film ideas, working on a short film with a friend and just more creative stuff in general!  Busy, busy, busy!  But having a lot of fun being so :)
Email Post
Labels: Original Illlustration