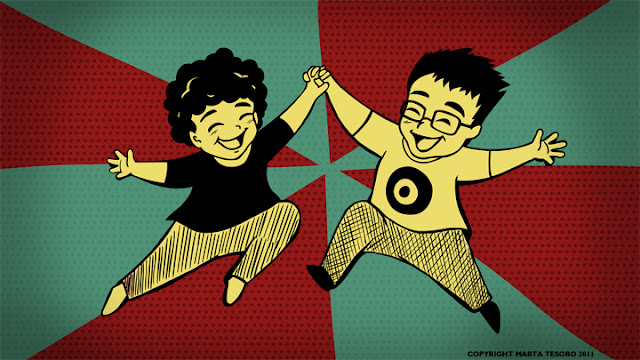 How is everyone?  Since getting back from my Europe holiday I have been working on small animation jobs and am currently looking for more work.  I joined a gym instead of going back to kickboxing and that 3D course I was going to do a week ago got cancelled due to lack of numbers so I am on the search for a new one.  There's a possibility of that starting in July.  We shall see.  I have also been working on my own very small animation which is taking ages.

In the meantime, I am drawing requests.  On my Facebook page I asked for people to send in their drawings requests and I will draw the first 10 given.  It all started when I gave friends: Tim Merks and Ben Grimshaw a couple of left of field drawings to do and I decided to return the favour.  Which may backfire.  Here are the list of requests to be done in any order and if it's highlighted then it's completed!:

1)  BEN: I want a flying cyborg octopus, that is in the bowels of hell, fighting off a horde of demons with his varied lasers, and being aided by his sloth sidekick.
2) TIM:  An episode of 'So you think you can dance' where the judges are being harsh at the performance of a giant T-Rex who is (rather than getting angry) is trying to hold back the tears of the public humiliation. Oh I'm sure he's wearing some kind of costume
3) LOMBARDI: Draw Tim and Ben holding hands
4) DANIEL: Requests you say... :P
How about a giant Kitty using a giraffe-shotgun to fight vampire-hulk. In space.
5) AARON: Request: A movie poster for the film "Machete" that would lead one to believe that it was a romantic comedy.
6) MARTIN: Woolly Mammoth paratroopers!
7) SANDRA: giant evil rabbit eating the longest pizza on Guinness world record actually, giant evil sumo rabbit
8) DEAN: a kitten and a baby fox playing in a field of flowers
9) PETE: A rancid baby teething on the enterprise while a stray shrink ray lies on the porch of the redneck family.
10) BEN: i get the last one...nice! okay, i want to see all the Disney princesses clinging to driftwood, in very heavy seas. a ghost ship, from the 1700's English colonial fleet is approaching them, and it's raining miniature grandfather clocks that are shattering when they hit the waves. enjoy.
The last one, needless to say will be very painful to do.
Anyway, I managed to finish one last night.  The request by talented  illustrator and animator, Michael Lombardi.     To draw Ben and Tim holding hands.  Thought I'd go for a more comic-like feel or a very cute propaganda poster.
More to come soon.
Email Post
Labels: Drawing Requests