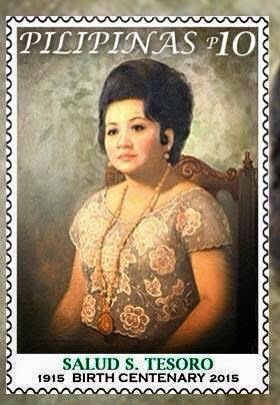 Hello!  My Grandmother, Salud Tesoro, would have been 100 today should she have lived.   In honor of her 100th birth centenary, issued by the Philippine Philatelic Postal Service.   There is a press release about her here.  Please also like the facebook page to keep up to date too!  Grandmother was a lady of great achievement and put Filipino Handicrafts on the map and is touted as the "Mother of Filipino Handicrafts".  She raised 10 kids pretty much on her own (including my dad) when my Grandfather died around his forties.  Gran lived to her 80's when she passed away which was some time now.

I remember her as being a very busy woman, normally found at the main store in Manila.  I saw her every Sunday, when the Tesoros gathered in her home, for many years when I lived in the Philippines as well as Christmas Eve and New Years Eve.  Christmas Day and New Years Day was normally spent at my other grandparents place.  I didn't know her very well as I was young and too busy playing with the other cousins my age.  She had a presence about her, I remember.  Later, I would be told by my dad that she was persistent, had a great deal of ingenuity, was very smart and was tough.  I wish I knew her better. It's great to see her achievements acknowledged and that people still remember her.

The party is on tonight in the Philippines, but alas, due to work commitments I couldn't make it.