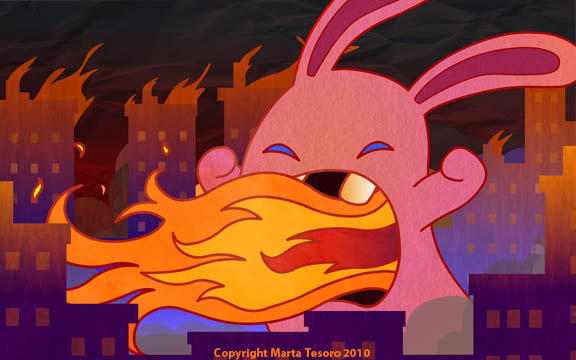 Do not make a giant fire breathing bunny angry!

This wasn't the intended finished illustration I was planning to put up yesterday.  I drew up a character sitting by the window sill and I came up with this drawing for what was happening outside the window.  Then I ended up liking the idea of a fire breathing bunny burning down the city so much that I decided that it was better for it to be a stand alone illustration rather than an extra.

All drawn up in Flash then textured and whatnot in Photoshop.

This coming week is my last week at Studio Moshi and I will be freelancing doing educational animations and illustrations after that from home.  Essentially, this coming week is deadline week so I'm going to totally bring my A game and help get the project done!
Email Post
Labels: Original Illlustration