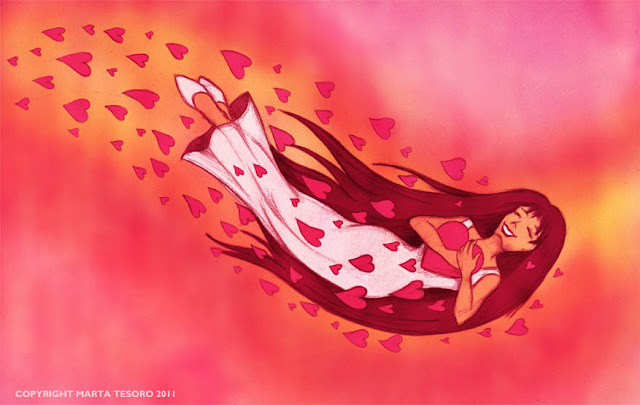 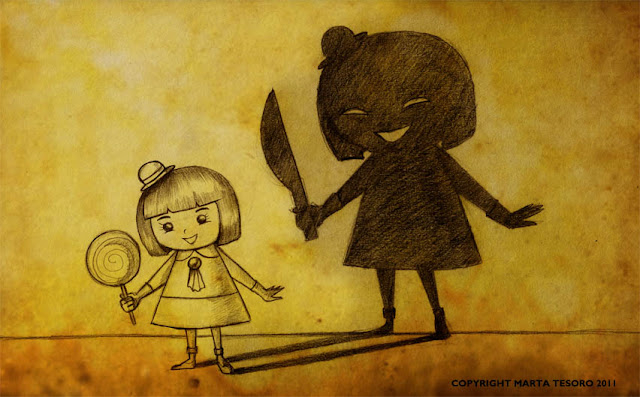 Ever been swept away by passion, love and the normal silliness that happens during that time?  It's a wild and fun ride though the destination at the end isn't always pleasant.  My drawing for Illustration Friday's theme: Swept.

I was really really busy last week animating on a pilot, which will hopefully show later this year, and was not able to create my drawing for Illustration Friday last week where the theme was "Shadows".   Though the concept isn't original, I really wanted to do this drawing so here it is!  I do like drawing very cute characters and adding an evil element to them.

Both illustrations are hand drawn and coloured into photoshop.

I got sick last Wednesday while working on this job but continued to push on anyway, which was probably very silly on my part.  I get a bit obsessive with work and I don't like missing deadlines.  Ever. That said, I really must remember the importance of work and balance.  So this weekend, though I did do a bit of work, I decided to rest up and do some of my own drawings, just for me.  I really wanted to go to the gym too but that may be a bad idea since I have just recovered from a fever....hmmmmm.....so I had a big slice of chocolate cake instead and stewed apples in cinnamon and sugar.  Definitely going to the gym later this week.
Email Post
Labels: Illustration Friday