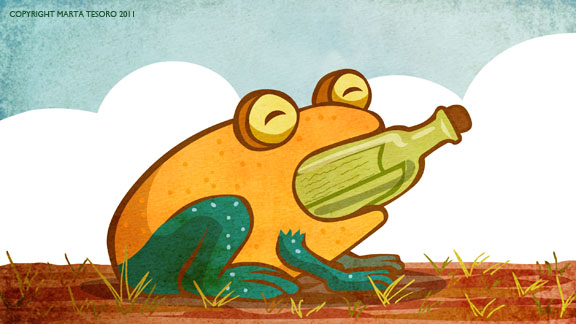 Illustration 181 in a row.  It's been a while since I submitted anything to Illustration Friday.  I am going to try and make sure that I enter one every week next year.  One of my New Years resolution.  I was actually inspired to do this after watching an episode of Naruto and I saw a frog deliver a message by pulling a Japanese scroll out of his mouth.  I thought it was pretty cool.  Here I changed it to a message in a bottle.  I love the idea of putting a message in a bottle and see where it turns up.  I first saw the whole message in a bottle concept by watching "Rescuers" by Disney when I was a little girl.  Have people seen that movie?

Anyhoo, today is gym day and am still deciding on whether or not to do weights or swim.
Daily Image Flash Illustration Friday Photoshop